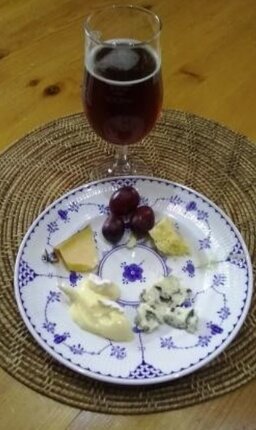 We are lucky to have the distinguished Beer Tutor and Master Trainer, Christine Cryne to lead the Beer & Cheese Tasting tasting at the Maidenhead Beer & Cider Festival on Friday, 8th July at 2pm.

What better way to spend a Friday afternoon than eating cheese and drinking beer.

Beer and Cheese are traditional partners so CAMRA's Maidenhead Beer Festival are offering you an opportunity to indulge! This session starts at 2pm and will last about 90 minutes

Come along and see how the complexities of the flavours in beer marry with the luscious flavours in cheese, all talked through by, Beer Tutor, British Guild of Beer Writers member and Master Trainer, Christine Cryne (http://cryneinyourbeer.sitelio.me/)

For more details on the Festival, including how to get there, go to: https://mbcf.camra.org.uk

If you book the Beer & Cheese Tasting it entitles you to free entrance to MBCF on Friday and on production of a valid CAMRA membership card at entrance a FREE pint.

Please go to the Beer & Cheese Tasting website to book your ticket.

Christine started her working life in the food industry, working for companies such as Unilever, Schweppes and Sharwood's. She attributes her love of beer to the genes she inherited. Her grandmother was a regular beer drinker. Christine loves educating people about beer, whether through tutored beer tastings or training, which covers both enthusiasts and the trade.

She is a Master Trainer and an accredited European Beer Consumers Union beer judge. Christine regularly judges at events and competitions such as for Wetherspoons and SIBA as well as chairing judging panels at CAMRA's Champion Beer of Britain Awards and the International Beer Challenge. She has also judged for the Free From Awards and is a judge for Beer Marketing Awards.

Her tutored tastings include venues as diverse as the Tower of London and the Farmers Club. In addition she has undertaken tailormade tastings for Accenture, Landsdowne Club and the National Liberal Club. She is also known for her food and beer matching having encouraged people to give it at go at events such as the BBC Good Food Show, Great British Beer Festival, Ludlow Food Festival, Danske's Copenhagen Beer Festival as well as a number of pubs and CAMRA beer festivals. Christine has served as a CAMRA Director and was the first woman to organise CAMRA's Great British Beer Festival. Christine regularly writes on beer and breweries and is a member of the British Guild of Beer Writers.

She also chairs CAMRA's London Tasting Panel, which provides the descriptions for CAMRA's Good Beer Guide on beers brewed in London, is the organiser of the London Drinker Beer & Cider Festival and one of the four beer writers who host a bar at Pub18 in February.